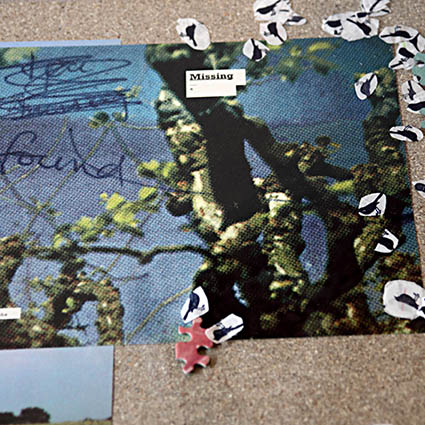 Lost & Found is a multi-media installation created by Oxfordshire based artists Jane King and Neil Mabbs, in collaboration with scientists from Oxford University Natural History Museum and Professor Dave Goulson at the University of Sussex.

The work explores links between our consumer driven society and the unprecedented number of British plant and animal species that have declined and become threatened with extinction over the past half century.

The artists investigate the notion of ‘loss’ and what that signifies for people in 21st century society.  They also examine how the practice of collecting has served as a base for knowledge in the West and how photography and print making continue to be used in recording and taxonomy. They reference the use of the photograph as ‘scientific evidence’ and combine techniques of display, labelling and notation, playing with the relationship between subjective aesthetic and objective document.

Lost & Found is a powerful and challenging installation of visual arts including mixed media prints, textiles printed at Glasgow School of Art, photography, film and projection, artists’ books and self-published newspapers, as well as invertebrate specimens from the Hope Entomological collections at Oxford University Museum of Natural History.

The supporting science includes the latest research results from Professor Dave Goulson, on the impacts of neonicotinoid pesticides on the British countryside.  Darren Mann, Head of Life Collections at OUMNH, has contributed research papers on the importance of invertebrates and the ‘services’ they provide for humans.  This arts-science collaboration investigates how the arts can help focus public attention on some of the most fundamentally important issues of our times.

An Inventory of Loss:  Neil Mabbs – statement for Lost & Found