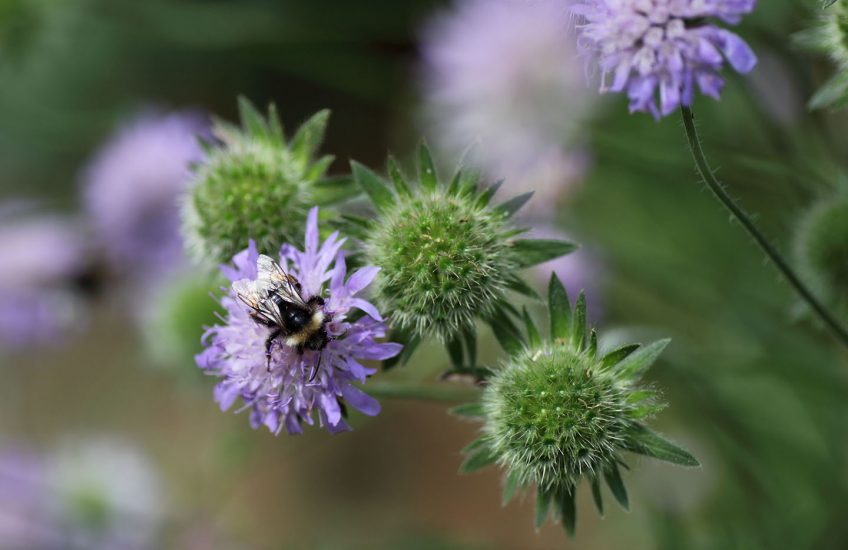 At the beginning of the month we attended the Oxford Real Farming Conference (ORFC15) to support James Taylor from Broughton Grounds Farm deliver a presentation for Friends of the Earth – part of their slot on pollinators and sustainable agriculture. We met James last year when he and his father Andrew agreed to contribute to our launch exhibition Lost & Found.

Our mission is to help bring the work of UK environmental scientists to the widest possible audience through exhibitions, publications and events.  Friends of the Earth asked us to approach the Taylors at Broughton Grounds Farm with an invitation speak at ORFC15 about how they are able to make a profit without farming intensively.  Their initial response was to decline because they weren’t confident that their management practices are specific enough to benefit pollinators.

We know the farm pretty well; we also collaborate with some of the best independent environmental scientists working in their field today so, with some advice from Professor Dave Goulson of the University of Sussex, were able to demonstrate why the farm has good potential to support biodiversity in general and pollinators in particular. This was a departure from our usual work but we were happy to assist with photographs and presentation content.

Independent research carried out by scientists such as Dave Goulson is producing evidence that can lead the way to a more sustainable future for farming and food production. Access to such evidence could give farmers the confidence to look for alternatives to the advice most of them currently receive from agro-chemical companies. Perhaps such independent advice should be part of future Higher Level Stewardships schemes. (See link at the end on how some farmers are beginning to form their own associations with scientists.)

The Taylor family has farmed at Broughton Grounds in Oxfordshire for 100 years. Andrew and his son James work 400 acres on a six-year rotation combining crops with pasture for livestock. They don’t grow crops intensively – no oil seed rape or maize – so have reduced the need for insecticides and have never used neonicotinoids. By including clover pasture in their rotation the soil retains fertility requiring much less chemical fertiliser. Species rich pasture, as well as banks which aren’t grazed in the summer, have never been fertilised with chemicals.

It would be clear to any experienced gardener that the soil at Broughton Grounds is healthy but evidence of this is demonstrated by good yields with low chemical inputs and by the fact that they don’t experience flooding in heavy rain caused by ‘run off’ from fields. This is something that has become much more common in Britain in recent years since heavy rain events have become more frequent.  After heavy rainfall the brook that runs through the land looks a little milky but not brown with sediment. 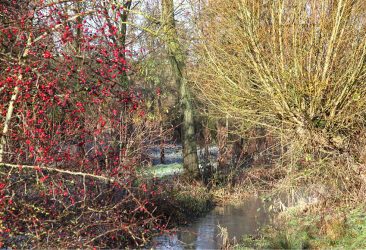 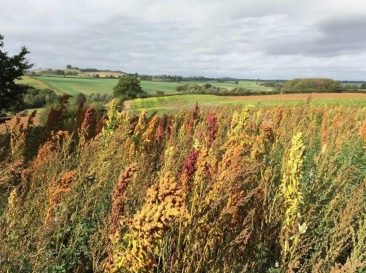 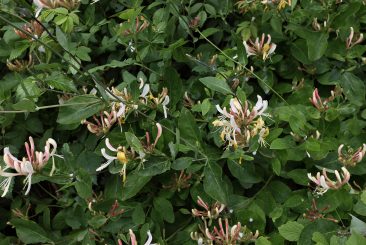 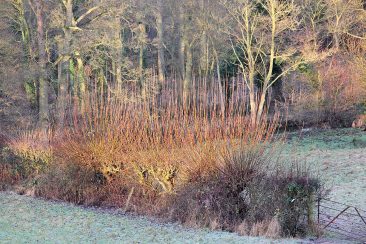 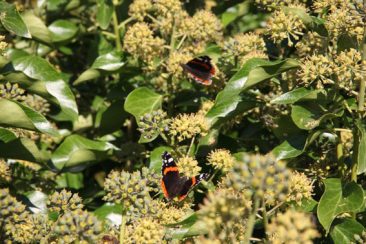 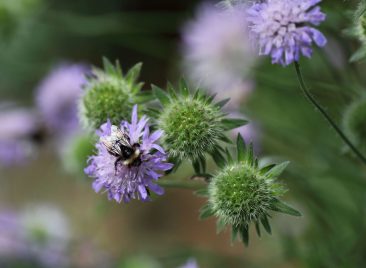 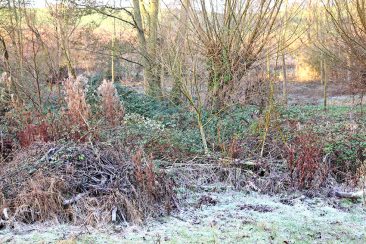 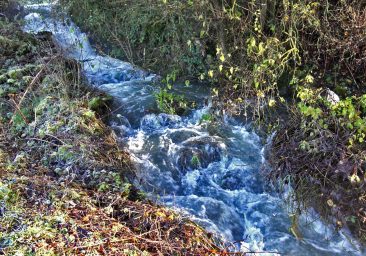 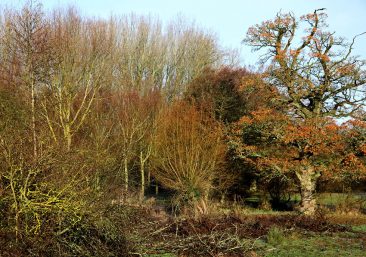 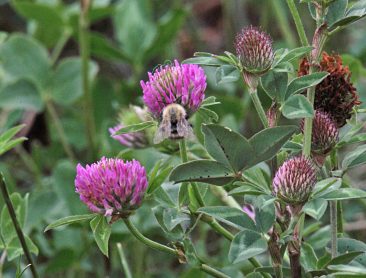 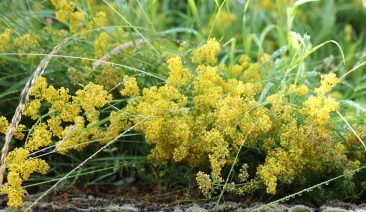 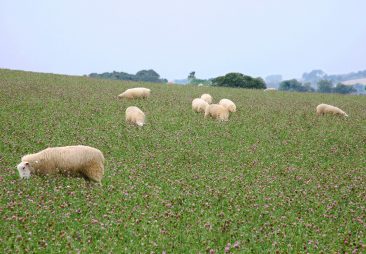 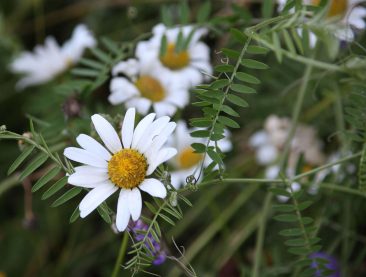 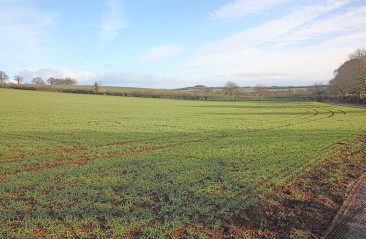 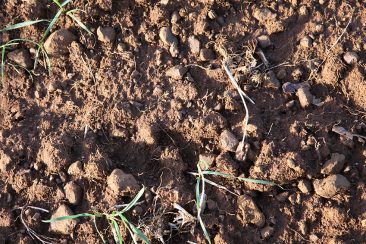 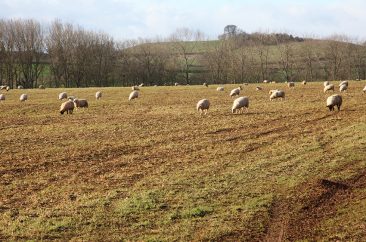 The farm has operated a Higher Level Stewardship scheme for the past 10 years. The Taylors have been farming in a manner that encourages wildlife for more than 40 years but the scheme now helps maintain habitats: veteran trees and hedgerows; substantial areas of undisturbed scrub with good potential to support nesting and hibernating wild bees as well as water meadow that also helps to keep habitats free from flooding by absorbing excess water.

The fact that no neonicotinoid pesticides are used is a huge benefit not just for pollinators but all wildlife living on the farm. Evidence from Dave Goulson and other scientists from around the world shows that neonics accumulate in soil and are now present in the wider environment in tree and hedgerow pollen, in field margin flowers, in water courses as well as the flowers and seed of crops they are meant to target.

Professor Bill Kunin of Leeds University is leading the AgriLand Project, a comprehensive study across 96 sites in Britain, to assess the reasons for the decline in pollinators and the wildflowers they depend upon. Early results from this suggest that suitable nesting habitat, continuity of forage and an absence of insecticides are more important for pollinator populations than sowing annual wild flower margins. This type of evidence is vital for developing strategies for sustainable agriculture in Britain.  More on farming and the Oxford Conferences below – when you have time!

Oxford now hosts two farming conferences: the long established Oxford Farming Conference and the upstart and provocatively named Oxford Real Farming Conference – ORFC15 is it’s 6th year.  On the face of it these two forums symbolise two faces of farming: the OFC – supported by scores of sponsors including the NFU, 4 banks, 3 major chemical multi-nationals and MacDonalds – representing those running industrial scale businesses.  Then there is the ORFC with just 3 sponsors bringing together those running smaller family businesses struggling to farm in the old ways with fewer chemical inputs. Having seen sessions from both however it’s clear that there is much more cross-over – all kinds of farmers up and down the country are concerned about the impacts that industrial farming is having on our lives and the UK landscape.

The past 40-50 years has seen a revolution in farming in response to the globalisation of the food industry. UK farming has gradually been transformed from a collection of family run businesses into huge national and multi-national industrial concerns. UK supermarkets, the most successful in the world, have become enormously powerful enabling them to drive down supplier prices allowing their businesses to expand and accumulate huge profits for shareholders.  Small farms have been squeezed out of business as a result. The only way to survive has been to consolidate land and specialise in just a few products on a larger scale.

The dairy industry was the first casualty followed by small farms all over the country that had traditionally mixed dairy produce and other livestock, with vegetables and arable crops. Huge swathes of woodland, hedgerow and scrub have been cleared so that Britain can grow arable and bio-fuel crops on an industrial scale. The Common Agricultural Policy has created a subsidy system that pays farmers for clearing the land of ‘unwanted features’ such as trees.

This way of farming isn’t cheap it requires huge amounts of fertiliser and pesticides to produce food. Specialising in just a few products has reduced crop rotation, which, as any gardener knows, is the first defence against pests and diseases. Growing a limited number of commodity crops such as wheat together with oil seed rape and maize (mainly grown for bio-fuel and animal feed rather than food) creates multiple problems.  Pests love mono crops so huge quantities of insecticides are required to limit damage together with lots of fertiliser as the land is stripped of nutrients. Of critical concern is soil damage from multiple applications of chemicals and compaction from heavy machinery.   An enormous 70% of land in Britain is agricultural so these changes have had multiple impacts upon our landscape, among them:

The images below show intensively farmed land on another farm taken on the same day as the soil examples above.  After heavy rain the compacted land is water-logged.  The crop isn’t thriving, the only way to achieve adequate yields is to apply large doses of chemical fertiliser.  The forth image (bottom rt) shows what happened here last year after the water eventually dried up. 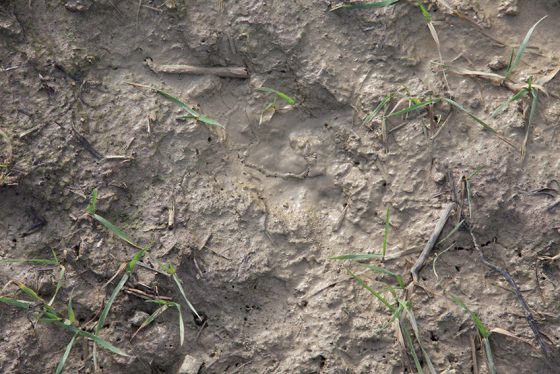 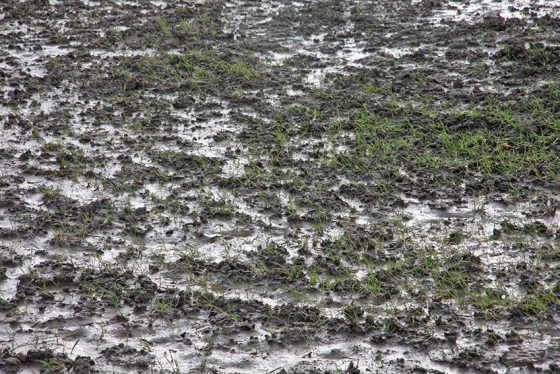 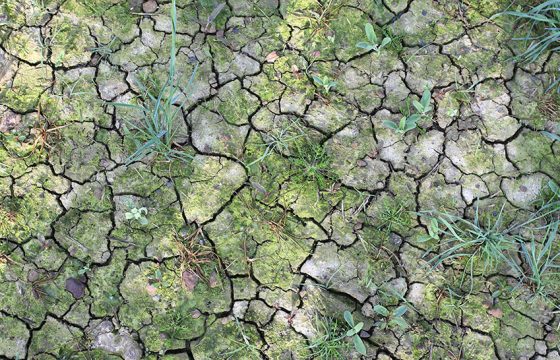 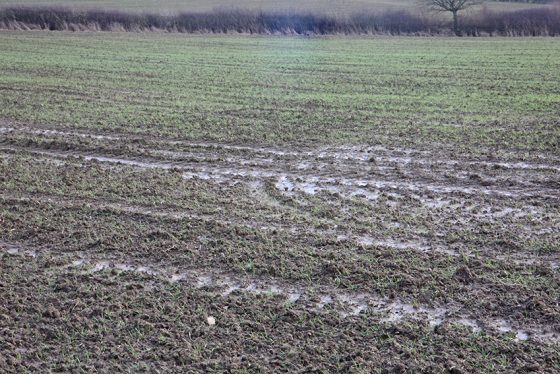 The argument that food is cheaper produced this way is no longer valid because of the cost of chemical inputs and the huge amount of waste that is generated. Large industrialised farms actually produce only 30% of the world’s food. The majority of our food – 50% of it globally – is produced by smaller traditional farms; the ones that are under threat in Britain. Many people are waking up to the fact that the big supermarkets are not the cheapest or best source of produce and they certainly don’t provide the best choice. Smaller supermarkets and local producers of meat and vegetables are often cheaper and increasingly provide more choice of raw ingredients than the huge hypermarkets that priorities own brands and high-margin ready meals.

Long term it isn’t possible to produce food in this way because it’s rendering the landscape not fit for purpose. We’re losing some of the basic building blocks for life – pollinators and soil as well – as the ability to protect ourselves from flooding. The clichéd phrase we reap what we sow couldn’t be more relevant.

The farming publication Farmers Weekly is offering courses on how to arrest soil damage via their Academy: ‘Many fields will run out of soil if the loss of 1 tonne per hectare a year from erosion continues …’

We where excited therefore to arrive at the ORFC15 to find hundreds of farmers and food producers enthusiastically listening to presentations from scientists and other farmers on how to protect soil and the environment, use fewer chemicals and still make a profit. On Wednesday 6th January, the day we attended, ORFC15 attracted more visitors than the much longer established Oxford Farming Conference down the road. Perhaps the tide is at last turning.

Farmers currently support a vast global market in agricultural chemicals and receive advice, on the whole, from within that industry. This situation clearly needs to change. Farmers need the best possible independent scientific advice to give them the confidence to change farming practices and make them future proof. As consumers we have enormous buying power; we can help stop decline in biodiversity and destruction of our living landscape by choosing more sustainable locally produced foods. Finding out more about the issues is paramount and there has never been more information available on sustainable food and farming options for our future wellbeing.

FARM: the independent voice of farmers set up by farmer Peter Lundgren with like-minded farmers, scientists and environmentalists