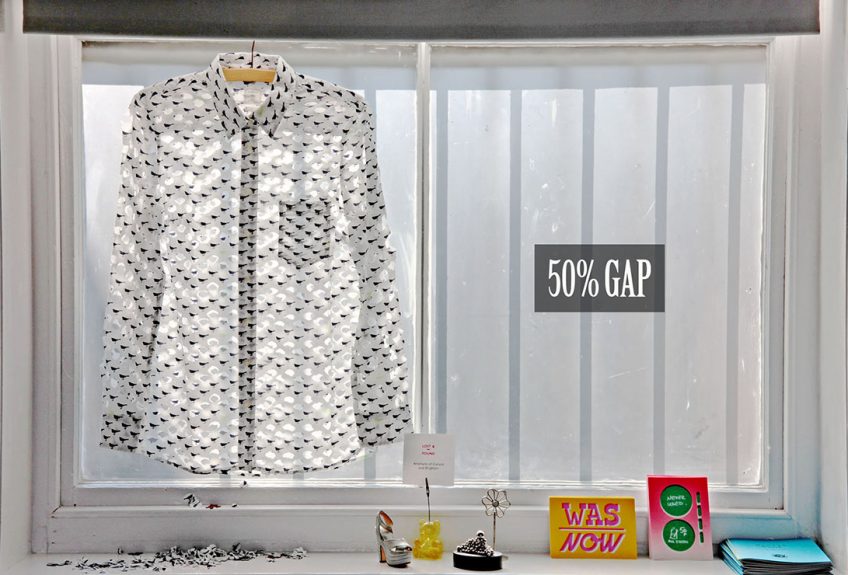 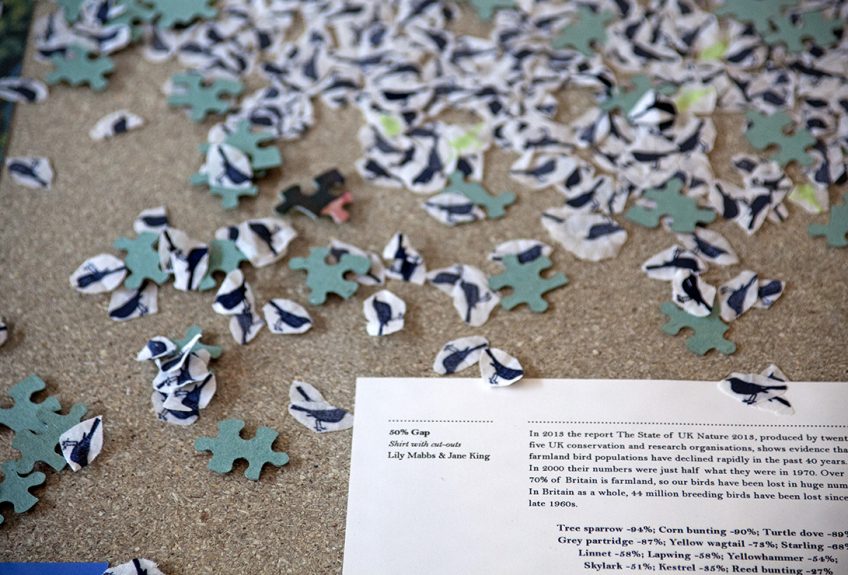 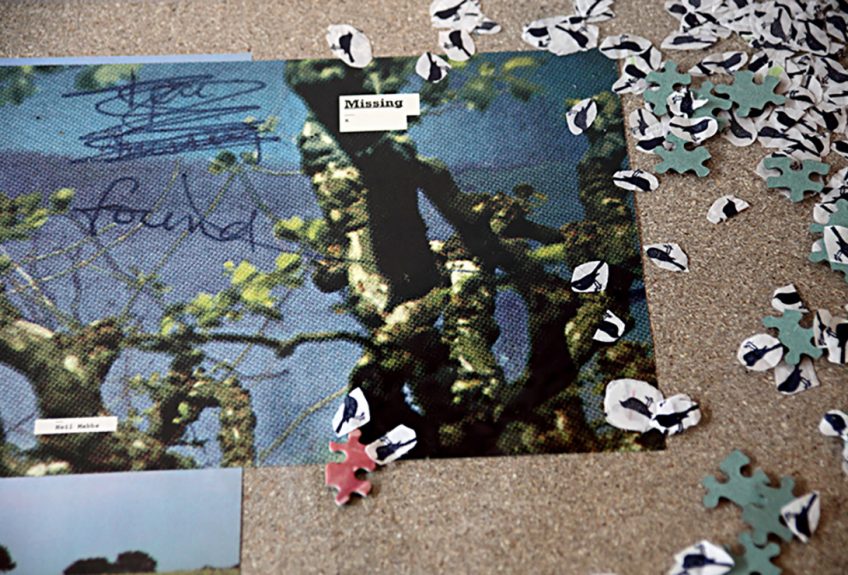 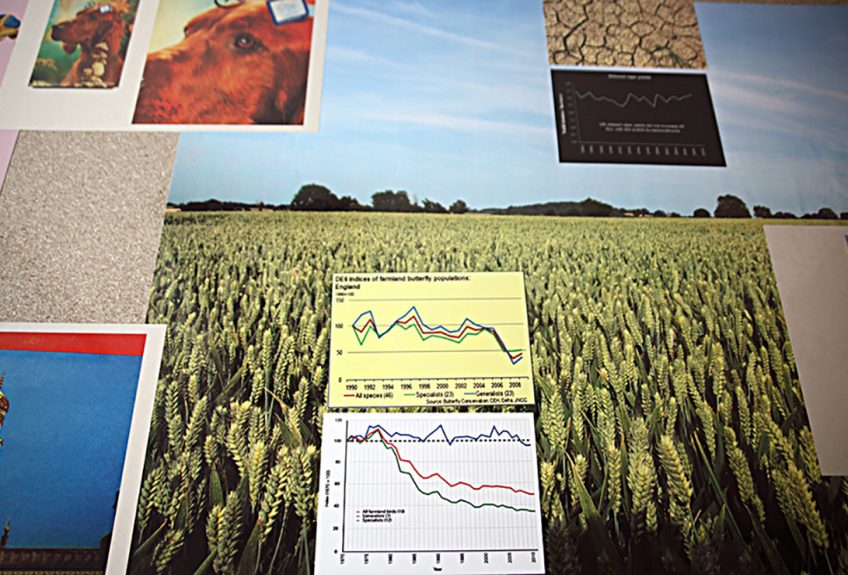 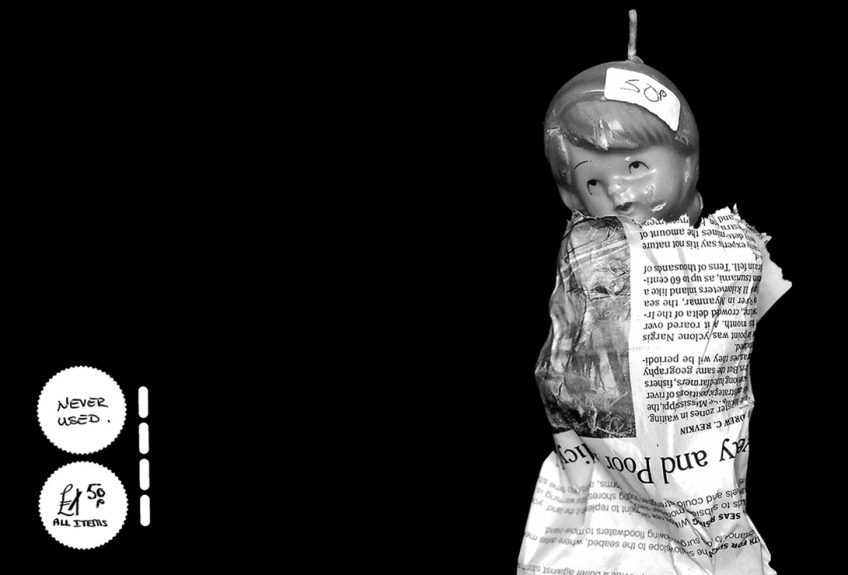 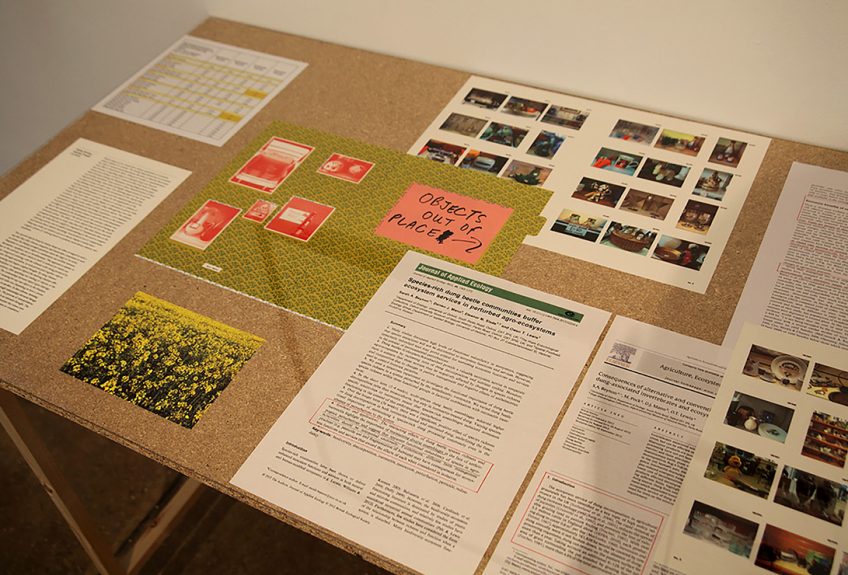 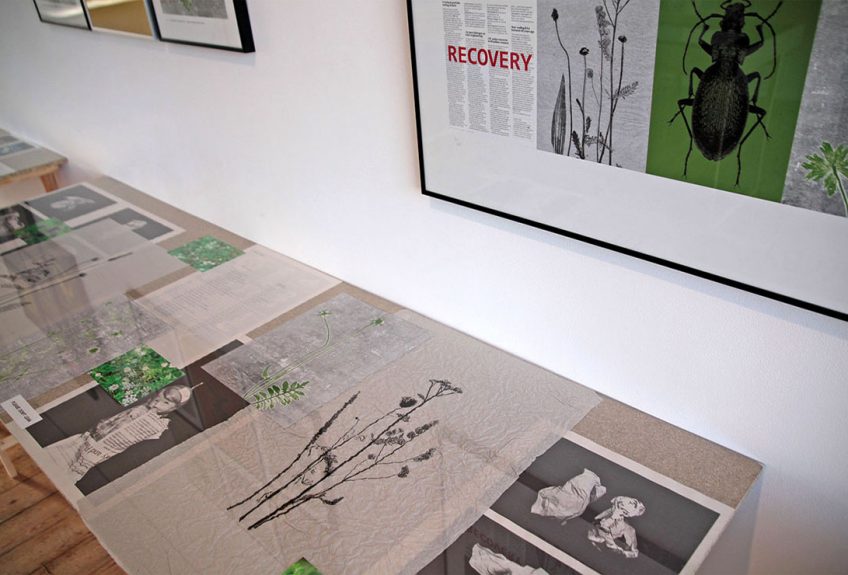 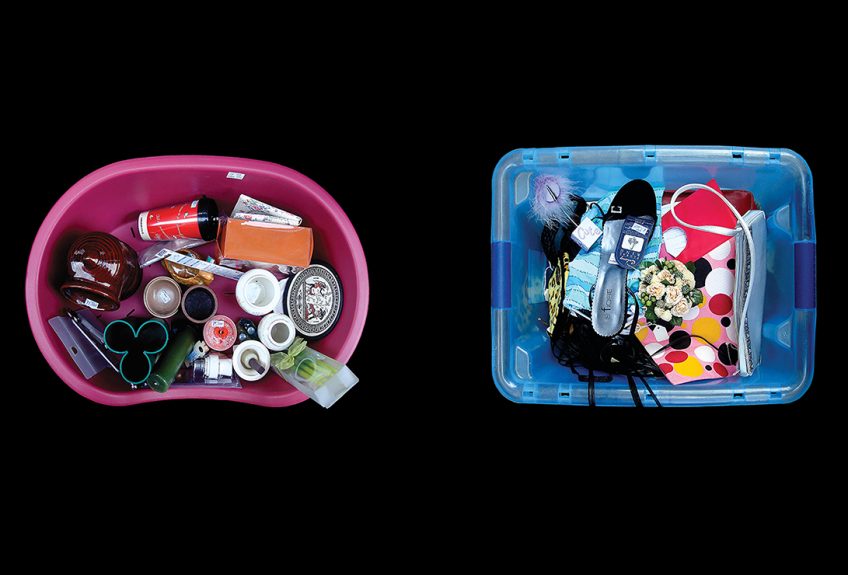 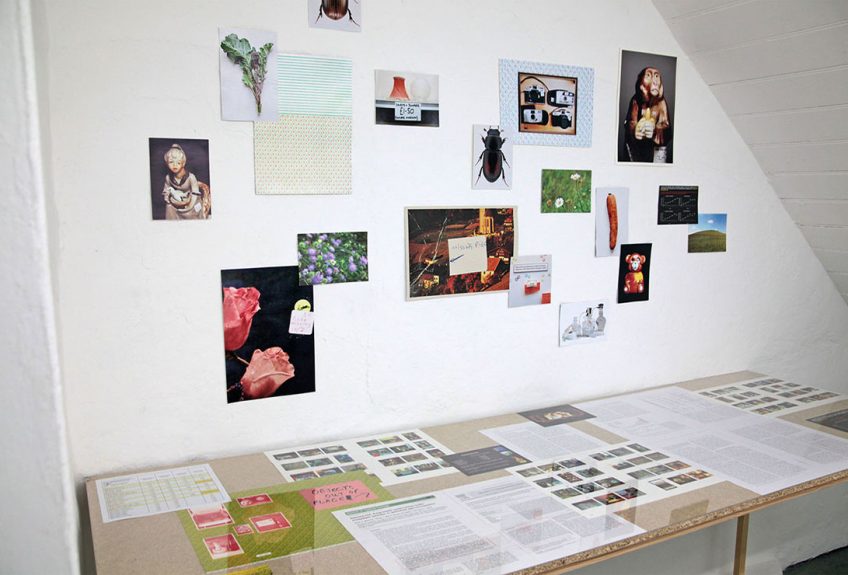 50% Gap is a multi-media mini installation originating from our environmental change project Lost & Found, a collaboration with the Professor Dave Goulson, an ecologist at the University of Sussex and Oxford University Museum of Natural History.

50% Gap raises awareness about the extent of biodiversity loss in Britain, focusing specifically on farming and food production as the main causes.  The work addresses the fact that the rate at which we are destroying biodiversity is destroying our chances of growing food sustainably as well as accelerating the rate at which the climate is changing.  UN scientists have recently reported that we have between 60 and 100 years of harvests left at current levels of farming intensification.

Consumer culture is explored as a reason why we turn away from these existential issues. Work addressing the destruction of our life support systems is juxtaposed with ephemera – novelty objects and foods that we can no longer afford to produce which distract us from the very real threats that we face.

The installation is regularly updated to reflect the most current scientific evidence.  It is designed to be displayed in diverse spaces and can be reduced or expanded depending upon available space.

The work comprises a Gap shirt with missing birds, photographs and photomontage, mixed media prints, postcards, posters, a textile hanging, found objects and purpose-made Evidence Tables (Between 1-6 depending on space) containing a combination of scientific research, prints and objects.

Brexit has divided the nation but some see it as an opportunity for change.  People are coming together to demand an end to the systems of farming and food production that are destroying wildlife and creating around one third of greenhouse gas emissions – more than energy production.  Protests are increasing; the Naturalist Chris Packham has organized a Peoples Walk for Wildlife on Saturday September 22nd.

Artists have an important role to play in bringing about cultural change.  We are continuing our work with Dave Goulson and are currently fund raising to make work for a joint venture, between the Universities of Sussex and Calcutta, that will help farmers convert to organic farming in the UK and India.

In 2009 a group of scientists, lead by Johan Rockström from the Stockholm Resilience Centre and Will Steffen from the Australian National University, explored the framework of Earth’s life support systems that are essential for human survival. They calculated how far these systems have been degraded by human activity and identified nine boundaries beyond which our own survival will be threatened by “irreversible and abrupt environmental change”.

Their study suggests that three of these boundaries – climate change, biological diversity and nitrogen input to the biosphere – have already have been transgressed. In addition, it emphasises that the boundaries are strongly connected — crossing one boundary may seriously threaten the ability to stay within safe levels of the others.

Although we think of Britain as a largely urban society, the British landscape is rural.  More than 70% of land is Britain is classed as agricultural so of all human activity, farming has had by far the greatest impact on wildlife in the UK.  It has become clear that UK biodiversity has been degraded beyond the point at which we can produce food sustainably.

Biodiversity is defined as the diversity of all biological life on the planet.  Individual species may not matter much on their own, but collectively they form ecosystems that provide a range of vital “ecosystem services”, such as recycling waste, cleaning water, absorbing carbon, purifying air, maintaining the chemistry of the oceans, preventing flooding, controlling agricultural pests, pollination and soil creation and retention.

The majority of UK farming is particularly intensive, producing arable crops for the commodities markets and processed food industries. (British people consume more processed foods and less home cooked veg than any other European country.) UK Biodiversity has been destroyed by ploughing up habitats; the introduction of alien species and by poisoning with agricultural chemicals. Soil has been degraded to such an extent that our future food security is under threat.

The EU’s Common Agricultural Policy (CAP) has been the main driver behind the destruction of ecosystems in the UK and the rest of Europe.  Its policies of continuous agricultural intensification, conceived after World War II at a time of food shortages, have persisted due to the powerful industry lobbyists of the 28 member states.  Brexit provides an opportunity for agricultural reform and a plethora of policy papers have been published by environmental groups and sustainability experts on how we could grow food more sustainably.  Most agree that we need to:  Plant more trees; regenerate soils; stop intensive single crop farming, move to smaller scale local farms that produce a diversity of foods, stop waste throughout supply chains; stop eating so much meat; move from chemical to organic systems

The British Government has recently announced a new bill that will introduce measures to protect soils but according to Professor Tim Lang, Professor of Food Policy at the University of London who has been advising the Government on policy, we need to ‘Get real’ because ‘Brexiteers are not interested in Climate change or sustainability they want to maintain cheap food’.

Professor Lang believes that the ‘food system is a juggernaut going in the wrong direction.’ and ‘Brexit means 10-15 years of deviation through restructuring’.

We use cookies to deliver some of the functions on our website. If you continue to use this site we will assume that you are happy with it.OK